Gazing into the Crystal Ball: “When Pigs Fly” 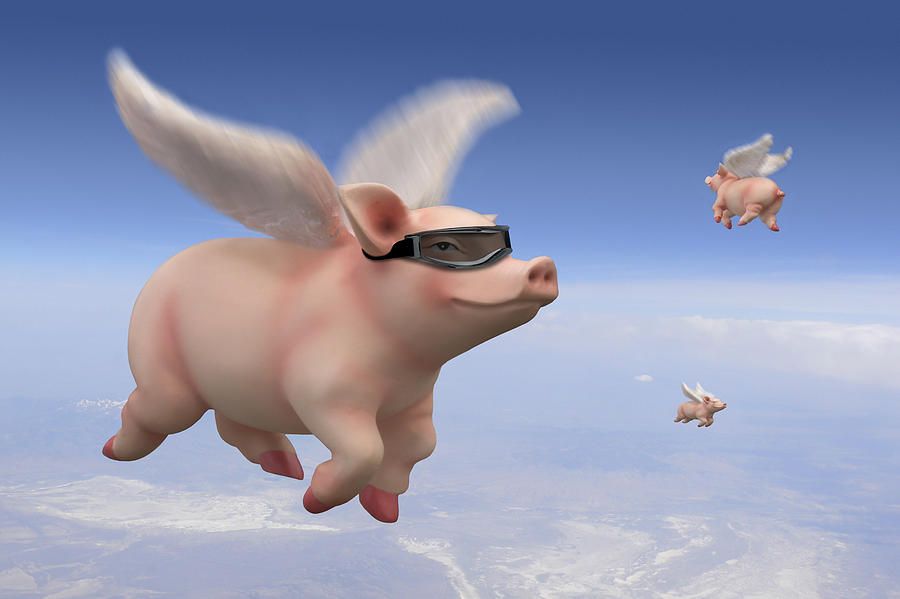 Coming out of the haze of holidays and the New Year, it is easy to become immersed in the backlog of emails and “to do” lists. These are essentially “looking back” exercises. Some of us may be focused on a goal or “resolution” such as organization of work, which is somewhat future focused. But early January is also a time of looking down the road. Making definitive plans is often a fraught exercise, as what seems like a certainty can be swept away by an unseen event. But it is useful, if one is circumspect enough about the ability to forecast.

Take the end of 2019 and what most of us were thinking about 2020. Who could have foreseen how an obscure virus on the other side of the world would change so much – to include a brief day in April 2020 when U.S. oil closed at a negative price. How about the end of last year? We knew the Russians were threatening their neighbor to the West, but who knew Ukraine would so boldly and courageously oppose the arrogant minions of Putin, and usher in wide changes in commodities across the globe?

The combination of war and weather have had their effect on global energy supplies, which affects prices and is felt in the energy markets of the Western U.S. Cold weather brought welcome frozen precipitation to many dry mountain ranges, holding the promise of a better summer for hydro power. But the price spread for natural gas between producing areas and coastal city-gates like L.A. and the Bay Area has widened to an absolute chasm over the last month. Henry Hub prices dropped to a little over $5/MMBtu, while prices at the SoCal City Gate were around $20/MMBtu. The yawning spread between natural gas prices in the East versus the West (New England excepted) is a factor of weather and where one sits on an interstate pipeline.

Our ability to accurately see the future is limited. So is our ability to gauge the right decision when unexpected events suddenly arise. When prices go high, as they have at various times in the Western power and natural gas markets, does that mean that state and federal policy makers or regulators should intervene? As we have seen with oil prices over the past 10 months, high prices don’t always last. $100/barrel oil (in both U.S. and European markets) were thought to be here for an extended period of time. But other factors, such as decreased economic activity driven by central banks to rein in inflation or mild weather as in the case of much of Europe this winter, often disrupt what appears to be a certain trend line.

The Perils of Government Intervention

I have never been a fan of intervention in markets to curb high prices. By the time the intervention begins to have an effect, markets either react to the high prices with investment to bring on supply or find substitutes. The adage of “the solution to high prices is… high prices” which leads to this investment or substitution effect is normally true.

There are exceptions, however, but they normally are the result of correcting poor government decisions in the first place. It certainly seems a good idea for the Government of Germany to delay retirement of three nuclear units in response to Russia cutting-off natural gas supplies to Ukraine and Western Europe. But that corrected what I would consider an unfortunate choice by the German government in 2011 to close their nuclear units. The same could be said about California’s move last year to keep Diablo Canyon Nuclear station running until at least 2030. But again, this a prudent reaction to an ill-considered decision (my view) by the state to close a plant that provides over 2,200 MW of zero carbon electricity.

So, what? Do nothing?

The solution to dealing with uncertainty is not to “do nothing,” as some might suggest.  Just as there are dangers to state-planning, there are also dangers to a purely laissez-faire approach to investing in important infrastructure. Experience suggests that two things are necessary to provide flexibility to deal with uncertainties that affect supply or demand that can cause sudden price increases or sudden price decreases (think “deflation”): 1) Well structured markets that provide transparency and easy access to multiple market participants, so that investments or substitution in the case of sudden price increases or liquidation in the case of price deflation; 2) a well-disciplined regulatory regime that responds to any structural problems or impediments to a functioning competitive market.

I will pause here to admit that opinions on how to define a “well-disciplined regulatory regime” may differ. For some, that “discipline” could imply price caps or other actions that I would consider harmful to a functioning market. But I think most would agree that a well-disciplined regulatory function would prevent rules that favor one market participant over others, require rules that increase - rather than decrease - market participants, while assuring markets are as transparent as possible.

Once these two elements are in place – efficient market structure and disciplined regulatory regime – then future uncertainties can be handled as best as humanly possible. What we in the Western US are struggling with is creating an efficient market structure. If we are to have the ability to have markets respond to unforeseen events that affect our energy delivery and prices, we need a structure that covers the region and a way for federal regulators to work with states and customers to provide the oversight necessary for a well-structured regional market (or markets in the case of more than one).

If we in the West can achieve a well-structured regional market(s), then we can be better positioned to deal with any uncertainty that will assuredly come our way. When discussing the possibility of a regional power market for the West, I recall one utility executive years ago expressing his view on such a likelihood as “when pigs fly.”  It seems that events are moving toward the “pigs” becoming airborne. Let’s hope this trend continues in the new year.